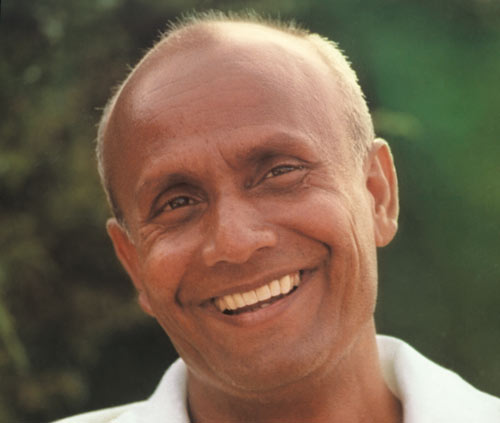 Sri Chinmoy is a spiritual teacher who has guided many students on the path of meditation and spirituality since his arrival in the West in 1964. He teaches a path of the heart and the philosophy of self-transcendence.. Sri Chinmoy also advocates an integral path based on the inner discipline of meditation and prayer combined with outer work (selfless service), sports, music and artistic endeavours.

Sri Chinmoy was born in India in 1931. At the age of 12, he went to live in the Sri Aurobindo Ashram, Pondicherry in South India. Here he had the opportunity to spend many hours in meditation. And at an early age he experienced the rare state of spiritual consciousness known as Samadhi. He spent the next 20 years in the ashram and as well as meditation he took part in athletics, music and wrote many poems. In the 1960s he felt an inner command to come to the West and so on April 13th 1964 he arrived in New York, US where he has resided until his physical passing in 2007. He established centres around the world. The first UK centres were established in London and Glasgow in 1971-72

Sri Chinmoy's life was an expression of boundless creativity. His output spans the domains of music, poetry, painting, literature and sports. His contributions in each of these fields have been unique and far-reaching.

Sri Chinmoy in the UK

Sri Chinmoy entered Mahasamadhi - the mystic process through which spiritual Masters leave the body, on the morning of 11 October 2007.

Sri Chinmoy himself was very active in many diverse fields. These include:

Sri Chinmoy dedicated his life to the pursuit of world harmony and created many new initiatives to foster this ideal. These include the Sri Chinmoy Oneness-Home Peace Run which seeks to spread friendship and harmony through a global relay torch run.